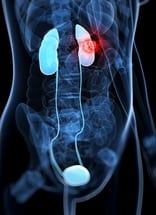 Kidney cancer is characterized by a tumor that begins in the kidneys, the bean-shaped organs that help remove excess water and waste from the body through urine. Cancer that originates in the kidneys is common, with more than 60,000 people in the United States diagnosed with it each year.

There are several different types, classified by where they originate, of kidney cancer. The most common is renal-cell carcinoma, which begins in the small tubes found in the kidney. Typically beginning as a single mass, it can usually be identified before it spreads to other areas.

Other common types of kidney cancer include the following:

Benign tumors are also often found in the kidneys, but they do not usually cause any harm to the patient.

The cause of kidney cancer is unknown. It is believed, however, to be the result of a specific gene mutation that can be inherited or acquired. Factors linked to a higher risk of developing kidney cancer include the following:

A person may be able to reduce the risk of developing kidney cancer by eliminating nongenetic factors such as smoking and obesity.

Kidney cancer often does not cause symptoms until it has progressed to its later stages, at which point the following symptoms may be present:

If left untreated, kidney cancer can spread to other areas of the body, and symptoms can worsen.

If kidney cancer is suspected, a physical examination is performed. The following tests may also be administered to confirm a diagnosis:

A biopsy may also be necessary to confirm a diagnosis of kidney cancer.

Once kidney cancer is diagnosed, its stage is determined.

In Stage I kidney cancer, the tumor is confined to the kidney. Cancer has not spread to lymph nodes or other organs.

With Stage II cancer, the tumor is confined to the kidney but is fairly large. Cancer has not spread to lymph nodes or other organs.

In Stage IV kidney cancer, the cancer has spread outside the kidney to adjacent organs, and possibly to the lungs, liver, colon, bowels or abdominal wall.

Although there are others, the above staging system, which was developed by the American Joint Committee on Cancer (AJCC), is the one used most frequently.

There are several different treatments available for kidney cancer. The best treatment for each patient depends on the severity and location of the disease. Surgery, because it is the only method that can thoroughly remove the tumor, is often the most effective treatment. Surgery may involve removing just the tumor, or the entire kidney.

For some patients, surgery may not be an option. Less invasive treatments are available to treat the disease for these patients, and may include the following:

After a thorough evaluation of the patient's condition, a physician is able to determine which treatment is best.